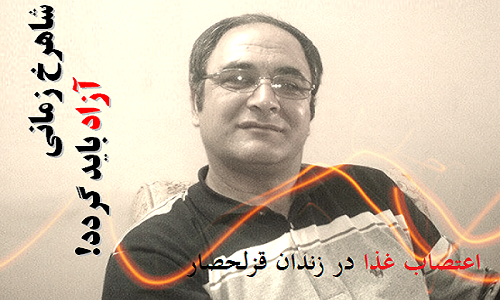 NCRI - The Iranian Resistance has called on the United Nations and human rights groups to take urgent action to save the life of a critically ill labour activist on the the 30th day of a hunger strike jailed for his opposition to the theocratic regime.

Shahrokh Zamani, 49, was arrested in June 2011 in city of Tabriz, north western Iran, and was sentenced to 11 years in prison on charges of 'propaganda against the system' and creating an opposition group.

Mr Zamani was then transferred from Gohardasht prison to Qezelhesar prison, where dangerous prisoners are held, on March 8.

In a message from Qezelhesar, Mr Zamani -  a member of Painters Union in Iran - had called for an international labour campaign against repression in Iran.

He has been repeatedly tortured over the past two years, and moved between prisons in Yazd, Gohardasht, Tabriz and Qezelhesar.

A number of Gohardasht political prisoners also went on hunger strike on April 7 and 8 in solidarity with Mr Zamani, calling for unconditional and immediate return of their former cell mate to Gohardasht prison.

The Iranian Resistance calls on human rights organizations and the United Nations Rapporteur on torture, as well as labour and trade unions, for urgent action to address the tragic situation of political prisoners and labour activists in the mullahs’ regime medieval dungeons.
Posted by M E at 6:14 PM