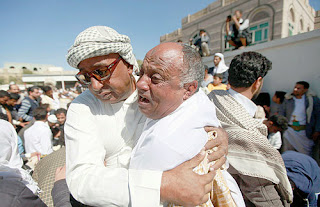 Detection of the initial report of the Commission of Inquiry set up by President Abed Rabbo Mansour Hadi for most of the attackers to the headquarters compound of Defense ( accidental ) in the Yemeni capital Sanaa , last Thursday , holding Saudi citizenship , and that they belong to al-Qaeda in the Arabian Peninsula , at the time I was amazed when some military circles Yemen the involvement of some Saudis in the attack , and confirmed that the process is a terrorist were in collusion with elements loyal to the former regime in Yemen , and that most of the materials used in the bombing matching what has been set in the vessels of Iranian arms that tried to reach the coast of Yemen during the past few months , which were seized in the Coast Yemeni .

More in my arabic weblog