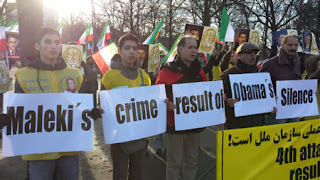 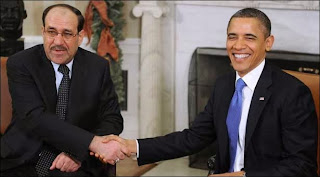 The fourth rocket attack on Camp Liberty in Baghdad suburb at 2115 on Thursday Dec. 26, 2013 local time destroyed a dozen of trailers and the infrastructure in Camp Liberty. So far three residents have been confirmed dead. They have been identified as Mohammad Javad Saleh Tehrani, Mahmoud Bornafar and Abbas Namvar. Mahmoud has been disfigured to the extent that identifying him at the beginning was difficult. A number of others have been injured, some in critical condition.
Iraqi PM Nouri Maliki and the Iranian regime Supreme Leader Khamenei are trying to overshadow the previous heinous massacre in Camp Ashraf where 52 innocent unprotected residents were killed execution style by creating a new crisis.
This attack happens following the trip by the Iraqi PM Nouri Maliki to Tehran and is a gift from Maliki to the fascist theocratic regime ruling Iran to insure their support in his bid to run for the third time as Prime Minister.
Posted by M E at 12:01 AM